Join me as I talk to Alison Morris about emotions, spiritual growth, neurology and more!

Can you ace the ACE test? Why a high score might be bad news.

When I was 32 years old, I found out about ACE at one of my lowest moments.

I had been referred to the social worker at the UCSF Cancer Center to help me find charity options to help pay for my cancer treatment. We talked a bit about my current work and financial situations, as well as my health and family history.

After I gave her the lowdown she stopped, put down her pen, pursed her lips and asked, “Have you heard of the ACE study?” I nodded my head no. “ACE stands for adverse childhood experiences. They’ve found that people who score a 4 or above on the test are at an increased risk for cancer and other diseases. Let’s see how you score.”

I’m a 4 on the ACE scale. Not the worst score possible, but enough to statistically put me between 400 and 1200% higher risk for things like diabetes, cancer, heart disease, obesity, smoking, broken bones, depression, and COPD than people with ACE scores in the lower range.

So what’s the connection? From what the scientists have found, there are several different causes.

Early childhood trauma or neglect causes the brain to become wired differently and the “fight or flight” mechanism is left permanently in the “on” position. This causes the body to be constantly flooded with cortisol, and too much cortisol is no bueno for the body. It causes an inflammation response which is the underlying cause for everything from weight gain to fibromyalgia to cancer.

Another connection is epigenetics. We all know about DNA, but our DNA isn’t necessarily always “turned on” or translated into proteins.

This is epigenetics – the ability to turn on or off certain strands of DNA. In people with high ACEs, certain genes that allow for certain diseases may be turned on as result of the adverse childhood experiences. Or certain ones that protect from diseases may be turned off. This is especially true if your mom or dad had substance addiction issues or were going through trauma when you were conceived and in utero.

Believe it or not, our genes can be affected even if mom or dad had trauma way before we were even conceived. More recent studies show epigenetic information is passed down just like genetic (DNA) information. Epigenetic information can encode not only for physical changes, but also for psychological characteristics like hopes and fears.

The last connection, and the one I’m most interested in, is belief systems. Belief systems can be passed down culturally, epigenetically, or in the case of many ACE households, by having a parent repeatedly and consistently tell you that you are not good enough, worthless, unloved, or unwanted. No matter how resilient you are, if you are 5 years old and are told you are not good enough or unlovable by the head honcho in your life, it ends up worming its way into your subconscious.

So, how does a belief system end up giving you cancer? There are two mechanisms by which this works.

The first is that our bodies are inextricably intertwined with our emotions and our belief systems. Emotions, belief systems, and self-concepts are not merely patterns of neurons firing (although that’s part of it) but they are also housed in our organs, connective tissue, and even our bones. If you have a belief system that you are weak and worthless, this can easily play out in your immune system and you can be one of those people who are constantly sick and unable to fight off even the smallest virus, which can lead to chronic infections with things like Epstein Barr, the main cause of fibromyalgia and Myalgic Encephalopathy (a.k.a. chronic fatigue).

If you believe that there is something fundamentally wrong with you and you are unlovable, your body may not attack the routine cancer cells that crop up daily in your system. Or it may fundamentally integrate that voice of your mother or father telling you that you’re not good enough, and your immune system may start attacking your own perfectly good body parts, causing an autoimmune disease, just to prove mom or dad was right.

The other mechanism is sort of like the evil twin version of “The Secret”. Many physicists now agree that consciousness and observation have a huge role in creating our reality. We can use this to create and manifest all sorts of crazy and amazing things, but the reverse is also true. We can also create disease and terrible circumstances. If it’s true that you can manifest abundance and joy in your life, you can also manifest lack, unhappiness, and disease. Manifestation isn’t just something that happens in the outside world, it’s and inside job, too. You can manifest a disease just like you can manifest getting fired.

For example, people who have had a spouse die have a 66% greater chance of dying within the first three months after their spouse’s death. Grief, loss, and the fear of being alone manifest incurable disease in their bodies.

Conversely, in a study of people who have gone into spontaneous remission from late stage cancer, the one factor that all the subjects had in common was a realization that they were connected to a larger consciousness. They had a realization that they were connected spiritually to everyone and everything and they had all the resources from that vast and all knowing consciousness to fight their disease. At some point soon after that, their cancer disappeared. The change in their consciousness manifested spontaneous healing.

In my work I’ve found that a two-pronged approach to belief systems has helped to heal many of my clients. First, I get to the root of the belief system. I find out family history and what type of adverse events they experienced and then I “tune in” and find the exact phrase or set of beliefs that their body has decided to act out through their illness or disease. Most of the time, we all want to just feel listened to, validated, and loved. Once we do that on a cellular level, the body feels like it can release the old belief system or programming. At that point we can replace it with another belief system that is better for the client’s health and highest good.

The second way is to reconnect or remind the client’s body of its spiritual nature and connection with the Source. We are all spiritual beings having a human experience. But despite our physical appearance, we’re all still connected to Source Energy (or God, or Universal Consciousness, or the Big Wow) and the deeper that connection, the less chance that these human fears and beliefs can resonate and set up shop in our physical bodies, causing imbalance or disease. Once I reconnect the direct line to Source, clients start to feel calmer, symptoms start to resolve and general well-being improves. It’s a beautiful thing to witness.

If you’re interested in finding your ACE score, here’s a link to the test: 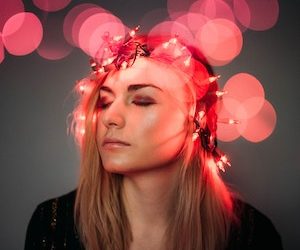